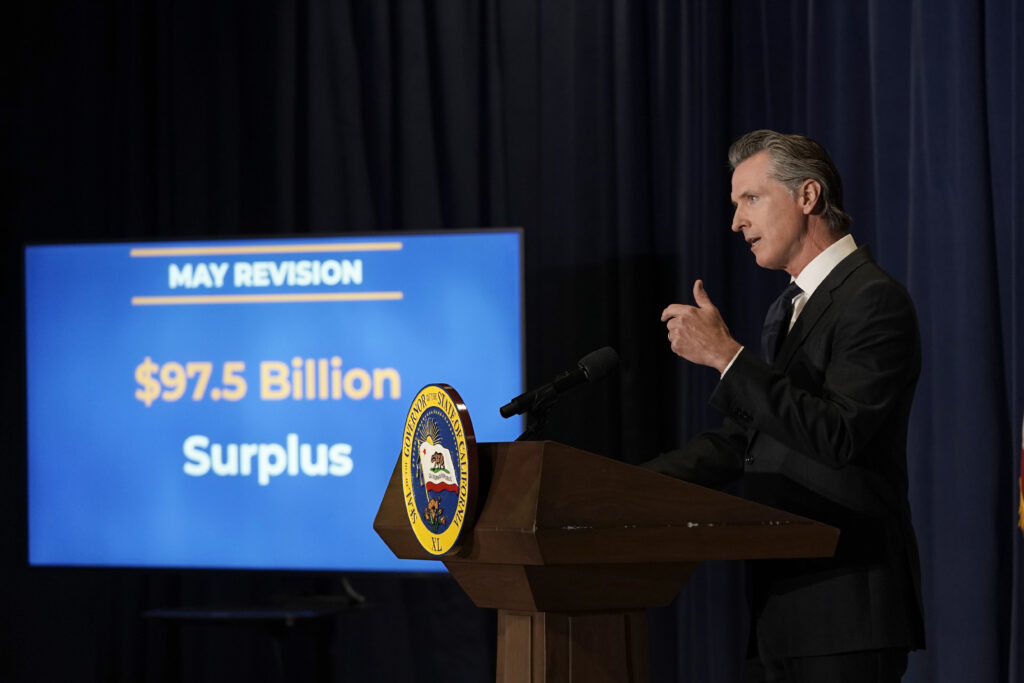 With state revenues continuing to defy projections, schools and community colleges would receive a record $128 billion in 2022-23 under Gov. Gavin Newsom’s revised state budget, which he presented on Friday. That’s nearly $20 billion more than the governor proposed just five months ago.

Newsom reaffirmed his January budget pledge of a 5% increase in base funding to the University of California and California State University for the next five years, in exchange for agreements to improve graduation rates and enroll more students and transfer students.

The TK-12 budget includes a sizable increase in general funding under the Local Control Funding Formula, which school districts and legislative leaders had made their #1 priority, as well $4 billion in funding for school construction and extra money for Newsom’s community schools initiative.

Newsom would also provide $3.3 billion to compensate districts for plunging attendance this year, in recognition of the impact of the Delta and Omicron variants on schools. Since school districts and charter schools are funded based on the prior year’s average daily attendance, Newsom’s proposal will further boost next year’s funding and address superintendents’ biggest worry.

Newsom already had proposed leveling projected post-pandemic declines in enrollment by proposing to let districts to switch to a three-year rolling attendance. He agreed to go further, he said, after hearing from districts and education advocates that the measure wouldn’t go far enough to make up for their enrollment loss in recent years.

Bob Blattner, a school consultant, commended the governor. “While the details are lacking, the governor listened loud and clear about this year’s attendance collapse,” he said.

Newsom touted his education proposals as education reform, while chastising governors of other states for focusing on arbitrary things like banning books or trying to fight “something that doesn’t exist,” critical race theory.

“That’s what all their time and attention goes to, that’s not education, period, let alone reform,” Newsom said. “We call it transforming public education, this will take some years but that’s what we’ve been doing the last couple years,” Newsom said. “We’re not just promoting, we’re investing, and you can see that reflected in these new investments.”

Other highlights of the TK-12 budget include:

On a cautionary note, the overall ongoing funding for Proposition 98, the formula that determines the percentage of state funding that must go to schools and community colleges, is projected to be $110 billion in 2022-23, the same as the current year – an indication that the three-year surge in revenue, mainly from capital gains receipts and personal income taxes, may be leveling off.

Not included in Newsom’s budget is a state subsidy for district contributions for employee pensions through CalSTRS and CalPERS, which face a steep increase in 2022-23. Newsom also doesn’t include increased funding for busing students to school – a priority of both the Senate and the Assembly.

Newsom and the Legislature now have a month to negotiate the final version of the budget to meet the June 15 constitutional deadline.

In exchange for Newsom’s pledge to increase base funding for UC and CSU, the systems have committed to things like improving graduation rates, increasing enrollment of California undergraduates and transfer students and eliminating equity gaps in graduation rates.

Newsom originally proposed those funding agreements in his January budget proposal, dubbing them “multi-year compacts,” and said Friday that his administration has completed the agreements. For UC, the 5% base increase means it would receive $200.5 million more in base funding in 2022-23 over 2021-22, while CSU would get $211.1 million more.

His administration has also finalized what Newsom is calling a “multi-year roadmap” with the state’s system of 116 community colleges. The community college system is expected to make progress toward similar goals as UC and CSU, although Newsom didn’t tie specific funding increases to progress on those goals, since the community colleges receive base funding via Proposition 98.

Newsom said Friday that the promise of 5% funding increases would help UC and CSU plan for the future, unlike in the past when they haven’t been guaranteed any specific amount of funding from year to year.

“We think this will be a game changer,” Newsom said.

Notably absent from Newsom’s proposal, however, was any major reform to the Cal Grant program, something sure to disappoint student leaders and college access advocates that say the state’s main system of awarding financial aid is in need of an overhaul.

The budget earmarks $157 million toward extending the current waiver on family fees for the state’s subsidized childcare. The proposal will help about 40,000 cash-strapped families save up to $595 a month during a time of rampant inflation, officials say.