A new state literacy program will help Virginia schoolchildren learn how to read, thanks to a new law ushered in part by clinic students at the University of Virginia School of Law.

Responding to persistently high rates of students failing to read at grade level, a legislator approached the State and Local Government Policy Clinic to help develop the Virginia Literacy Act — bipartisan legislation to ground literacy instruction in science-based reading research, and provide guidance and support for all stakeholders in the education system, including higher education.

Professor Andrew Block, the clinic’s director, said the comprehensive approach of the bill will dramatically change how Virginia teachers its youngest students to read.

“First, the Virginia Literacy Act will require that when it comes to reading instruction, everything our local schools provide must be evidence-based,” he said. “And second, it embeds these requirements into all aspects of education — from how our institutions of higher education prepare teachers, to what kind of ongoing training receive, to what sort of curriculum and, if necessary, remediation are offered to kids who aren’ t reading at grade level, and to what supports are provided to parents.”

He added that the bill’s passage succeeded because Coyner, with the support of the clinic, laid the groundwork well before the session started in January, made a focused effort to attract bipartisan backing, and worked early and often to earn the support of the newly elected Youngkin administration.

The clinic’s efforts and the eventual legislation were informed by the work of Professor Emily Solari, a nationally recognized expert on literacy at the UVA School of Education and Human Development who spent hours helping both clinic students and policy makers understand the reading needs of Virginia’s youngest students .

Solari said students spent time learning about early literacy instruction and why it was important. They also provided expert testimony during committee meetings as the legislation made its way through the General Assembly.

The bill has potential to make a significant impact on early reading and writing instructions for children across the state, she added.

“This was a true team effort and a great experience for the clinic students to work with an amazing and hardworking legislator like Delegate Coyner and an expert like Emily,” Block said. “They learned both the technical side of legislative development and advocacy, but also the substantive side of literacy and reading instruction.”

Clinic students Kara Hafermalz ’23 and Christina Kelly ’22 first met in September with Coyner, who laid out her goals for the legislation. They looked at other states that had enacted similar changes, scoured the Code of Virginia to determine where they needed to propose changes and worked with Solari and others to make sure that the substance of the proposed legislative changes would deliver the kind of reading instruction that Virginia students require. The team also met with multiple K-12 stakeholders throughout the process and adjusted the draft legislation as needed.

Hafermalz said stakeholders didn’t agree on every aspect of the bill but were thankful for having their voices heard.

“I learned just how difficult it can be to whittle down a large amount of information into a digestible format,” she said. “Our initial research came in the form of a 20-page memo, which we then had to reduce to two pages, and then one page, and then to a one- to two-minute-long testimony for session. With a bill as comprehensive and complex as the Virginia Literacy Act, condensing all the good it does was no small feat.”

Oat malt said that the legislation is crucial for students at risk for reading difficulties, especially after disruptions caused by the COVID-19 pandemic. Children who cannot read at grade level by third grade are four times more likely to leave high school without a diploma, she added, and weak early literacy skills are related to incarceration, low civic engagement and poor health outcomes.

The clinic helped pass four bills this year, and a total of 10 over the past two years. 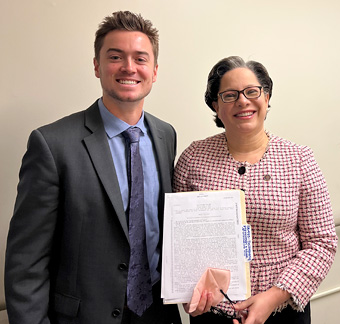 Among other clinic legislation passed by the General Assembly, Erin Camia ’22 and Antonella Nicholas ’23 helped Coyner with a bill that directs the Department of Health to collect and analyze information regarding social determinants of health. Scott Chamberlain ’23 and Nate Wunderli ’22 worked with McClellan on the Delinquency Prevention and Youth Development Act to provide grants through youth services citizen review boards. And Jela Shiver ’23 and Maggie Woodward ’22 helped Del. Suhas Subramanyam on a bill that digitizes the paperwork process for the state procurement system.

Joshua Hassell ’22 and Cait Kutchi ’22 worked with Del. Jeff Bourne on legislation to curb sovereign immunity and establish a best practices model for law enforcement data, but those bills failed.

While not all of their proposed legislation passed this year, Block said the students worked hard, impressed legislators with their research, preparation and testimony, and he hoped they learned a lot from the process. Overall, Block said passing bipartisan legislation overwhelmingly through a Republican House of Delegates and Democratic State Senate showed that the clinic’s work paid off.

“It says to me that even in an era of divided politics, there’s a lot of good, important work we can do if we spend the time doing it, and there are a lot of opportunities for people to reach across the aisle and work together ,” he added.