Parents and educators say schools already have mechanisms for reviewing and challenging curriculum. 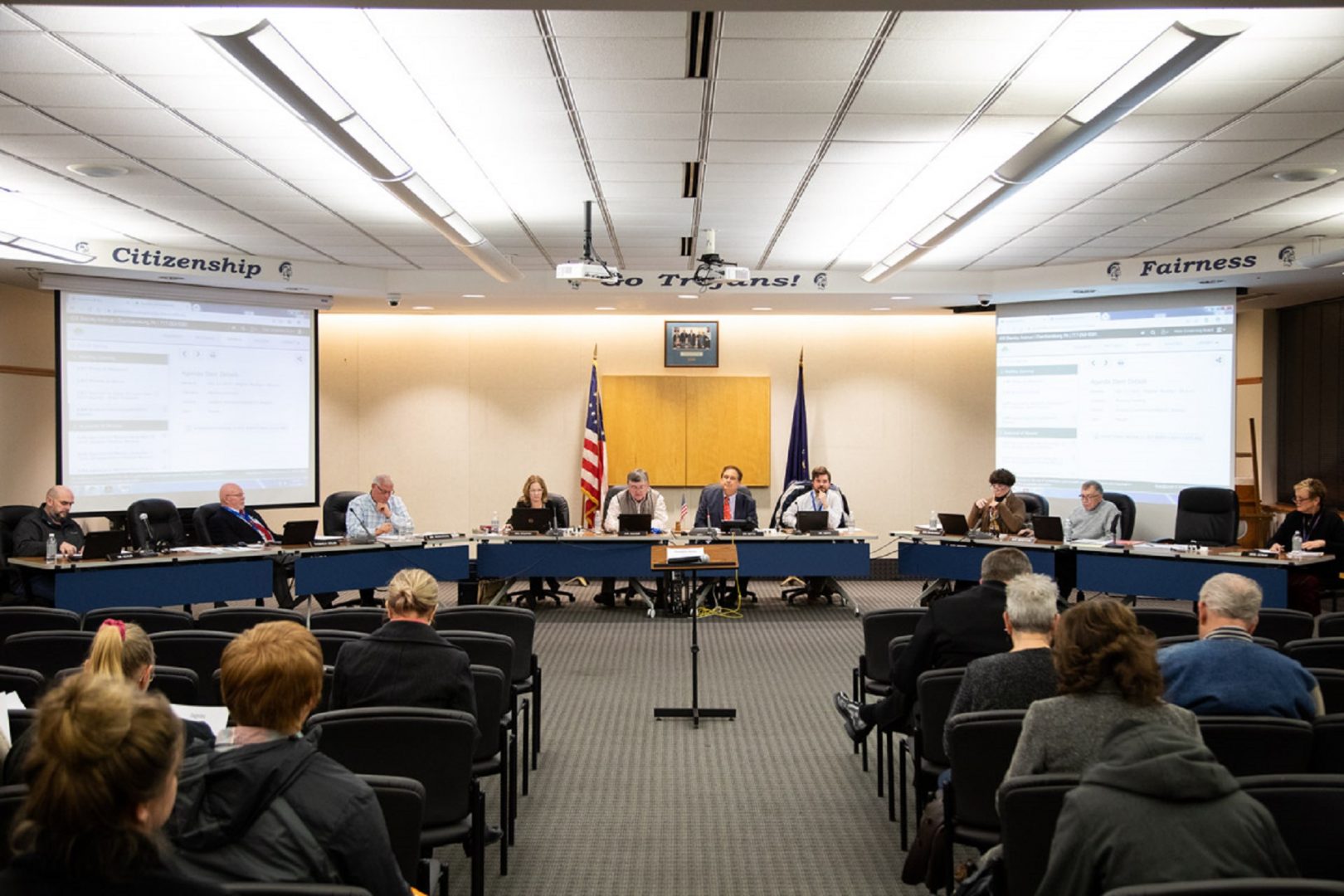 A Chambersburg School Board meeting, December 2019.

When the public comment period started at an Elizabethtown Area school board meeting in late April, Tina Wilson was the first parent at the mic.

The agenda that night was focused on the district’s budget. But Wilson had something else on her mind.

She said she would be formally complaining about a book in the school library called “Me, Earl and the Dying Girl,” which she considers “disgusting,” because some of its lines allude to sex.

She also objected to the school teaching social and emotional learning.

“Figuring out what my kid feels, what they should feel, and what I should teach them about that. That’s all my job. Not yours,” Wilson said. “You have my kid all day long. You can plan anything you want in that little head.”

Another parent, Kelly Fuddy, used her four minutes of public comment to read a letter that Jesse Andrews – the author of “Me, Earl and the Dying Girl” – wrote to the district. Andrews’ letter noted the book is on a list of 850 flagged by a Texas congressman.

“I’d like to speak up on behalf of the other 800 books, the majority of which are about what it is to be either not white or not straight in America,” Fuddy read. “They are 800 well-crafted, useful windows onto the world in which your children must make their lives. To shut them is the antithesis of education.”

Scenes like that have become more common in Pennsylvania schools and across the country, as schools field complaints about books and curricula that teach about racism, gender identity or that mention sex. Parents and conservative groups who are leading efforts to challenge teaching materials are demanding more control over what gets taught in schools.

In Pennsylvania, the conflict is a big part of the race to be the Republican candidate for governor.

They say the issue could be tackled by implementing school choice policies.

Critical race theory is a college-level concept that analyzes how post-slavery racism is built into US institutions. Candidates, however, are using the term as a catch-all to refer to diversity and inclusion curricula in schools, or any attempt to talk about racism.

As part of his education plan, Mastriano says he would ban critical race theory and call for a “thorough review of district diversity, equity, and inclusion plans.” He also says he would “establish ‘parental rights’ statute in Law.”

McSwain proposes a “parent’s bill of rights” that ensures “the right to have your child educated free from hateful ideologies like critical race theory.” hey wrote in an op-ed that he would “fight back against teachers’ union bosses in defense of students and good teachers.”

Lou Barletta has a similar position.

“We’re going to put education back in the hands of mom and dad, and not politicians, who literally want to tell our children what to think,” Barletta told Pittsburgh talk show host and sports columnist John Steigerwald in January.

The other candidates frame the issue of more around school choice and stronger parental roles in school districts, and less about eliminating “CRT” in schools.

Melissa Hart, former congresswoman and Pennsylvania state lawmaker, says parents have reason to demand more transparency in schools since they are the taxpayers.

Nche Zama, a heart surgeon, says parents should have “skin in the game” when it comes to their children’s education, meaning they should be involved in their education. He also believes there should be transparency when it comes to school curriculum.

“Parents have the right and should know what their children are learning in school,” Zama said. “I’m not saying that parents should take over. No.”

Candidates who promise an end to what they perceive as indoctrination — and who want to give parents more say in what is taught in schools — are delivering what can be an effective message, some experts say.

Chris Borick, a political scientist at Muhlenberg College, says the candidates are targeting a broader group of white suburban voters. He says in part it could be an effort to replicate how Glenn Youngkin became Virginia’s governor in 2021. Youngkin ran on a promise of giving more power to parents and making sure what he considered “CRT” is not taught in schools.

The issue “really seemed to help Youngkin in some more suburban moderate areas of the state” where “efforts to deal with race in education might have become too extreme, at least in the minds of some voters,” Borick said.

Sam Chen, a GOP political consultant and member of the Conservative Education Reform Network, says anti-CRT talking points have been effective in part because people don’t know the definition of critical race theory.

Republicans, as well as moderate Democrats, he said, “do not want to be told they are racist… They don’t like the rhetoric that I have to be an anti-racist, especially if they’ve never dealt with racism.”

What some teachers and administrators say

The “indoctrination” messaging, though, doesn’t match reality for education professionals.

Chris Lilienthal is director of communications for the Pennsylvania State Education Association, which represents more than 170,000 teachers. He says for many members, “it’s insulting” when candidates suggest teachers are indoctrinating children.

Lilienthal says PSEA encourages teachers to be transparent and work with parents.

“What we have told our members is really to have an open door dialogue with both the parents of your students and the members of your community,” he said.

Duffy Batzer, a school librarian and parent in Carlisle, says there’s a fundamental misunderstanding about the purpose of public education.

“Schools aren’t about serving parents. Parents are not our clients – society is,” Batzer said. “Our goal, as public education, is to give each child the tools and the skills and the knowledge they need to be active members of our society.”

Kristy Moore, a parent from Elizabethtown Area School District and a teacher in another Lancaster County district, said teachers put a lot of work into their classes and into gathering resources for students, and they are always willing to work with parents.

School districts already have a “checks and balances” system when it comes to approving curricula, said Mark DiRocco, executive director of the Pennsylvania Association of School Administrators, which represents over 900 members.

In Pennsylvania, proposed curricula are discussed in public meetings and voted on by school board members elected by the community. Some schools will have parents sit on curriculum committees, DiRocco said.

“This idea that parents don’t have any say about what’s taught is totally ridiculous,” DiRocco said. “Every school district typically has a policy that allows parents to challenge something in the curriculum, and if they have conflicts with their religious beliefs, they can opt their kids out of that curriculum. That’s in the school code right now.”

What some parents say

A new national poll by NPR and Ipsos found that 76 percent of parents feel that their child’s school does a good job keeping them informed about the curriculum, even with potentially controversial topics.

Another recent poll by Franklin & Marshall College shows that 70% of registered Pennsylvania voters support teaching history of race and racism. More than half are against parents being able to sue over curricula they oppose.

At the recent Elizabethtown Area School District board meeting, parents who spoke revealed differing views on how much they trust teachers and schools.

“The bottom line is I want to teach my child my morals, and my beliefs, and I don’t know exactly what the school wants to teach her. That’s the problem, they’re not transparent,” Wilson said.

Kelly Fuddy, a member of a parent’s group called Common Sense, says claims about lack of transparency do not hold up, because schools already have processes in place for complaining about teaching materials or classes.

“If you simply ask, rather than making a big public show and trying to say that there’s no transparency here … suggesting that there’s a problem that actually doesn’t exist,” Fuddy said. “So it’s frustrating to see that over and over.”

Alisha Runkle, who also has children in the district, says she would not feel comfortable making curriculum decisions for other children.

“I’ve homeschooled, and it wasn’t as successful as having an actual teacher teach my child,” Runkle said. “I don’t have the qualifications, and I’m trusting our school district and public education to educate my kids.”