Voters in Fresno Unified’s Area 5 have until 8 pm Tuesday to turn in their ballots for the special election to choose a successor to the late Carol Mills.

The winner of the special election will serve the remainder of Mills’ term through November 2024. Mills, a longtime trustee who was reelected in November 2020, lost her battle with Lou Gehrig’s disease last July.

The campaign has been marked by some public name-calling and political antics. Two of the candidates, Levine and Renteria, have collected tens of thousands of dollars in political contributions, while Fabela and Allen are running low-cost campaigns.

Levine, whose supporters include Fresno Unified Trustee Veva Islas, continues to be the frontrunner in campaign contributions. As of the most recent campaign report on Friday, Levine’s campaign had amassed $67,389, including $3,402 in nonmonetary contributions. Levine’s biggest contribution was $10,000 from the Fresno Teachers Association PAC for Education.

Through March 31, Renteria’s campaign was reporting $28,472 in contributions, including $8,000 in loans. Granville Homes has contributed $5,000 to his campaign and $3,923 in a nonmonetary contribution for a billboard. GV Wire publisher Darius Assemi is President and CEO of Granville.

Fabela declared on his initial campaign filing that he didn’t plan to raise or spend more than $2,000. However, last month Fabela created a treasury campaign to accept a $2,500 contribution from “Fix Fresno Unified School District” in Imperial Beach, California.

The $2,500 was spent on “campaign signage,” presumably the large campaign signs in the back of a 1955 blue pickup truck that Trustee Terry Slatic said on a radio show last week he has been driving around the Fresno High neighborhood and parking in “strategic” spots.

Fabela’s claim in a GV Wire profile story to having been a member of the elite Smokejumper corps was later questioned by other smokejumpers.

Allen declared that he wouldn’t raise or spend more than $2,000.

County Clerk James Kus said Area 5 voters should use drop boxes or the voting centers in Area 5, because drop boxes in other neighborhoods outside the Fresno High Region have been locked.

For those who like in-person voting and want to collect an “I Voted” sticker, ballots may be dropped off now through Tuesday during business hours at the County Clerk’s Office.

On Election Day, the voting centers will be open from 7 am through 8 pm

Kus said votes still may be dropped off at post offices, but to guarantee they receive a postmark voters might want to carry their ballot inside to the counter instead of putting their ballots in a blue box. Ballots must have an April 12 postmark to be counted.

As of Monday morning, 3,232 ballots had been cast, according to the County Clerk’s running total. There are more than 26,000 registered voters in Area 5.

GV Wire hosted a candidate forum on March 3 that was attended by three of the four candidates.

The forum is available as an audio download to your mobile device via The GV Wire Podcast channel on all major podcast apps. 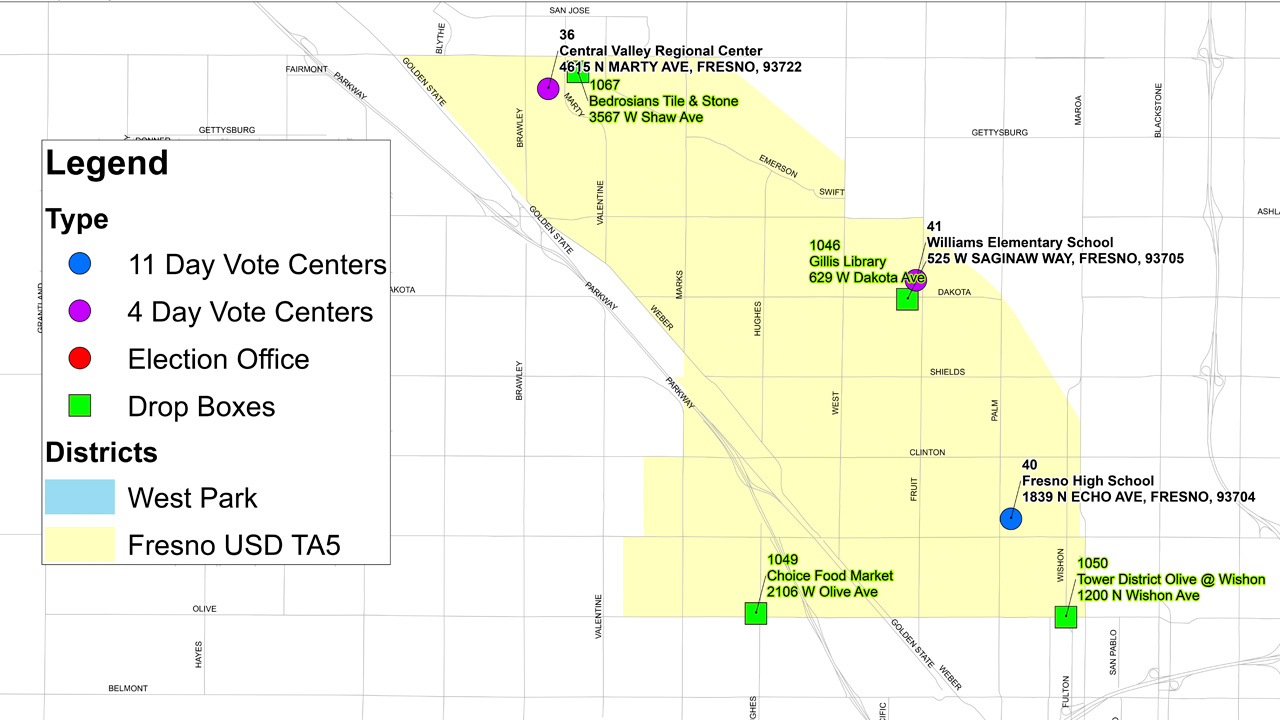